The Golden Gear :: Sala del té :: The side of the Empire

Lately I was wondering which term would be appropiate to call or describe ourselves in English. In Spanish, I often use the word "steamer" but, although I'm not pretty sure, I guess the term "steampunker" is most commonly used in English speaking countries.
Could anyone enlighten me, please? Thanks in advance!

I personally preffer the term "steamer" and, at least in my experience, it is the most commonly used in international forums. But as I'm not a native speaker myself, I can't assure it. 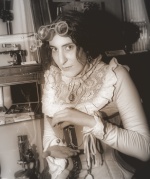 I also preffer the term "steamer", I think it's easier and faster to say than "steampunker" and it sound better to me ^^ Anyway, I think that there is no solid foundation for these movement, everything that has been said are just theories so I hope one day will come somebody and will enlighten us all with arguments and reasons and will tell us "We all must be called steamers/steampunkers because in the year blah, blah, blah, many interesting-but-boring-to-listen stuff, and that's the word of Steamgod". That's my opinion =P

To tell the truth I have never given this issue that much of a thought, but now it has risen I am quite intrigued.
I have heard the usage of both terms rather broadly in Spanish. However, I could not assure that either is correct in English.
Take a look at the word "punk". A fan of punk music, isn't a punker, he or she, is just simply a "punk".
The same can apply to heavy metal (heavies), or gothic (gothics) for example.
Nevertheless, I must say that I personally would not use Steamer when talking English, as the word steamer is widely used for old steamboats. And in a very grotesque slang (which I will explain in the following spoiler... don't want to offend anyone with ruthless language!)

Spoiler:
A steamer in rude slang makes reference to a very recent defecation... "to take a big hot steamer" could be one usage... you can imagine the other examples...

is quite common.
A steamer is also very common in kitchens, as the appliance used for steaming meals has this name.

I am very amused by this conversation and I will try to dig up more information on this topic! And if you should find something new please do not haste to tell the rest!!

Profesor Von Brokenheimer escribió:Nevertheless, I must say that I personally would not use Steamer when talking English, as the word steamer is widely used for old steamboats. [...] A steamer is also very common in kitchens, as the appliance used for steaming meals has this name.

Taking these meanings and the one in the spoiler too I just can think that using steamer wouldn't be a complete failure, it would just be another case of wide synonymy ^^ But I hadn't thought (although I've heard about it) in using "Steampunk" as the one who loves this genre, but it doesn't seem such a bad idea ^^

Spoiler:
A steamer in rude slang makes reference to a very recent defecation... "to take a big hot steamer" could be one usage... you can imagine the other examples...

Herr Professor... I must recognize that in the beginning I laughed... But just a couple of seconds later I imagined one of those things steaming out and it was so... Creepely disgusting... That I began to laugh a few seconds later xD

Thanks for all the answers

So it seems that the most appropriate term is either "steampunk" or "steampunker"... I rather prefer the first, but it's just a matter of taste.

And thanks to Herr Brokenheimer for enlighting us about those, let say, curious meanings of the term "steamer"... I'll be careful from now on when speaking with English people! XD

Spoiler:
Actually the scathological meaning of steamer is short for a "big pile of steaming sh**
So thus we can use it for many meanings:
- I read that book you recommended... it was a real steamer (big pile of...)
- Did you see the semifinals yesterday? Yeah... it was nothing but a huge steamer
and so on

The Golden Gear :: Sala del té :: The side of the Empire